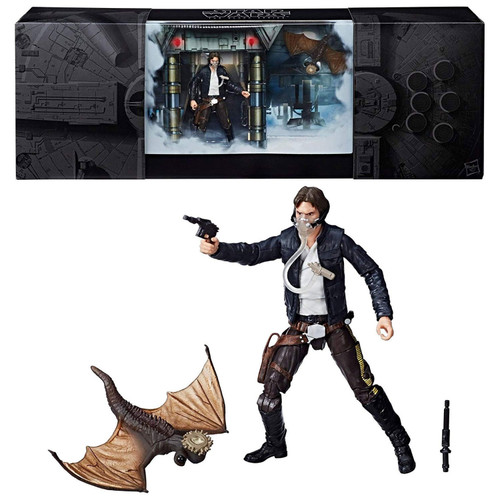 After the Battle of Hoth, Han Solo evades capture as he maneuvers the Millenium Falcon towards a large crater in the Hoth asteroid belt. Solo discovers that he has in fact landed in the mouth of a giant space slug. Inside is an environment of noxious fumes and parasitic mynocks – bat-like creatures who eat through power cables and drain the energy from ships. Kids and fans alike can imagine the biggest battles and missions in the Star Wars saga with new, 6-inch-scale figures from Star Wars The Black Series! With exquisite features and decoration, this series embodies the quality and realism that Star Wars devotees love. These Han Solo and Mynock figures are carefully detailed to look like the character and creature from The Empire Strikes Back, featuring premium detail and multiple points of articulation.